From The Union, Nevada County, California 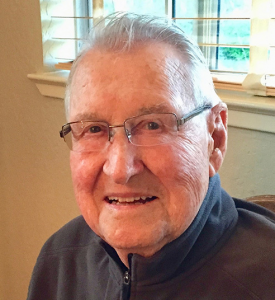 George Stevenson Holeman, Jr. (Steve) passed away peacefully and painlessly in his own home on July 2, 2021. He was 95. Per his request there will be no memorial service. He had a huge celebration with family and friends on his 90th birthday.

Steve was born May 29, 1926 and was a proud Native Son, raised in Centerville (which is now Fremont) California. His parents were George and Estelle Holeman. Steve served in the Navy/Marines in WWII as a medic. He graduated from Santa Clara University with a Bachelors Degree in Biology and completed his Masters Degree at San Jose State University to become a teacher. He worked as a Life Science Instructor at Alameda High School for 2 years and San Jose City College for over 30 years. In his brief role as Dean of Student Activities at the City College during the 60’s he had many fascinating experiences such as meeting Eleanor Roosevelt, Martin Luther King Jr., & Louie Armstrong just to mention a few.

Steve did not hesitate to speak his mind; however, his radiant warmth, friendly personality, and great sense of humor made him loved by all. He is survived by his three children: Sandy, Daniel, and Lisa (all Holeman), and his grandson Ashley Barnes; plus his step-children Debbie Pettee, Patti Egge, Suzanne Planck, and grandchildren Taylor and Katie Lauck.

Donations can be made to Hospice of the Foothills, 11270 Rough and Ready Hwy, Grass Valley, CA 95945, in memory of Steve.