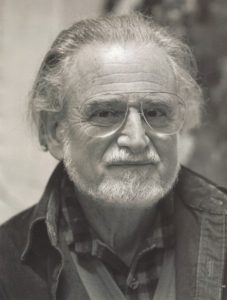 Renowned artist and printmaker Joseph Zirker, passed away on June 25, two months shy of his 98th birthday in Redwood City, California. Joseph Zirker was born on August 13,1924 to Clarence Harold Zirker and Lillian Rappaport Zirker, in Los Angeles California. Zirker was a renowned and respected innovator and multi-medium artist who worked as a printmaker, papermaker, painter, sculptor, teacher and poet and inspired thousands of students, collectors and fellow artists for more than 70 years.

Joseph Zirker invented a unique process for creating monotypes which is documented in his two books: The Cast Acrylic Print and Translucent Transformations. He also developed collaged sculptures of wood, foam core, and cardboard. Using copies of his handwritten words and other common materials he created tabletop-sized sculptures. Examples of his work can be seen at www.josephzirker.com .

Joseph Zirker is listed in Who’s Who in American Art, was a member of the National Academy of Design, and received two Pollock-Krasner awards. He received his MFA from the University of Southern California, where he later taught printmaking. He taught at San Jose City College (1966-1984), and lectured at Stanford University, and Portland State University. His workshops have been held at Drake University, Rice University, Cooper Union School of the Arts and in several art academies in Belgium and the Netherlands. He is represented in numerous public collections, including the Smithsonian Institute, Stanford University Museum of Art, Achenbach Foundation for the Graphic Arts; Brooklyn Museum; the Anderson Collection, Centrum Frans Masereel, Belgium; De Saisset Art Gallery and Museum, University of Santa Clara; Fine Arts Museums of San Francisco; Free Library of Philadelphia; Grunwald Collection, U.C.L.A.; National Academy of Design, New York; National Gallery of Art, Washington, D.C.; Oakland Museum of California; and the Portland Art Museum.

In the 1970’s Zirker and his beloved late wife, Eva built a studio in Menlo Park that was featured in Sunset Magazine for its unique and beautiful design in the Willows neighborhood in Menlo Park.

Joseph believed “Art is the garden of social justice, and that includes all mediums in its expression.” He was constantly inventing new methods for creating art and often used his art to reflect on political and world events, always in the interest of poor and working people. He worked in his studio up until 3 weeks before he died, most recently creating new images from tire treads.

Joseph’s wife of over 50 years, Eva, died in 2015. He is survived by 4 children, Karen Jo Koonan of San Francisco, Daniel Zirker of Hamilton, New Zealand, Lisa Moses of Chang Rai, Thailand, and Nila Zirker of Terrell, Texas. He is also survived by three grandchildren and five great grandchildren.