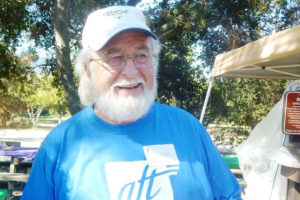 Sometime in the summer of 2006, Barbara Hanfling, Mark Newton and I were sitting in my backyard enjoying a beer and talking about AFT6157 and other related items. Having been retired for two years from the ranks of the full-time teachers, I had been reflecting on the well-being of my fellow emeritus colleagues, of whom there were many, and the number was growing greater every year. Part-time faculty, of which I was now a member, were always in our union conversations and always a part of negotiations. Retirees, though, seemed seldom considered. The district administration, along with the Board of Trustees, it was felt by most, put a plaque in our hands and waved goodbye, happy to see us go so that they could replace us with someone less expensive—don’t call us, we’ll call you.

Well, I thought, maybe that’s the way it should be. We’ve done our career thing, and now we can each do our other things that we have always wanted to do. If we have a collective organization, though, I thought, maybe there are some things we can do together. It was an idea that I wanted to explore. The three of us in the meeting that day agreed to send out some feelers. With the passage of time, we found lots of retiree activity around the country, but not much in California. Ultimately AFT/CFT found some model Bylaws and parent/local agreements that were useful. We drew up the documents, my friends Walter Soellner and George Forrester agreed to serve as first officers, we called a meeting, held elections and in Oct. 2007, AFT6157-R came into being. That was 12 years ago. Walter, Debbie and I would all like to hand the reins over to younger visionaries who can breathe some new, fresh air into the organization. Ron Levesque has shown us what new life can do. In a relatively short time, he has achieved some remarkable changes. We have some elections coming up at our meeting on Nov. 5; I hope you will come and volunteer for an office.

On another matter, during the last couple of meetings, our members have discussed the future of our treasure. With steady dues payments over the past 12 years, and recent conversion to conservative investments, it has grown to an amount worth discussing. I personally would like to see it continue to grow as a source of security. There are others who would like to see it converted to scholarships. Most, I think, would like to see the base continue to grow through our dues income, but anything earned through investment be directed toward a scholarship. This latter compromise makes sense, but I am not yet certain that we have enough investment income to make that happen. A little more time will help us make some final decisions.

Making decisions is a related subject that needs to be understood by all members. Input from members is an integral and important part of our decision-making process. The elected officers of AFT6157-R constitute the executive committee of the organization, and they are the ones who, through a deliberative process, adhering to Robert’s Rules, voting and simple majority quorum requirement, make all final decisions. Several people asked me how such decisions are made, so I wanted to clarify.

I hope this finds everyone in good health and spirits