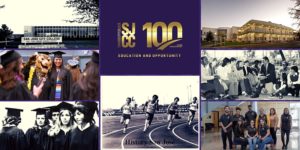 San Jose City College’s Centennial was marked by two events during September. On Monday, September 13, a morning event was held on campus while classes were in session. The timing explained the absence of faculty and classified staff from the program. Dignitaries from the City of San Jose and Santa Clara County met with the District’s administrators to salute the college. Even those who had never been to the college were impressed by the campus, its program offerings and its importance to the community.

A student-centered open house took place on Saturday, September 18. I attended the event with two prospective students and was impressed by the welcome we received. SJCC students registered us and presented the prospective students with swag bags containing items such as SJCC/EVC facemasks, a water bottle, a $15 food voucher good for lunch at one of the four food trucks on campus and a scorecard. The scorecard was to be marked at each of the stations that the prospective students visited. But first came the campus tour, led by a student and hosted by staff and students. For those who have not been on campus in some time, it is most impressive to see the changes made to the Cosmetology Department, the repurposing of the oldest buildings on campus for the HVAC Program, the dance studio, the art gallery, and the sports complex with its basketball court named for Percy Carr.

A large tented area on the quad was ringed by tables at which programs, such as ESL, and services, such as financial aid and the registration process, were explained to visitors. Teresa Paiz, now the registrar of students, was happy to explain how her department functioned, following the mentorship of Rosalie Eskew. With their scorecards filled, the prospective students were able to enter a drawing to be held later in the day.

Throughout the day, guests could enjoy an array of multicultural talent. While we were there, we enjoyed Taiko drummers, a West African group offering music, singing and instruction in dance, and Los Lupenos.

At 100, San Jose City College is looking good with fine new buildings, repurposed older ones, and a campus kept in impressive condition by the Grounds staff.