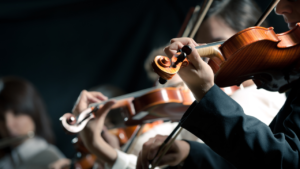 In the 1960s, the city of San Jose had few entertainment venues so the theater at San Jose City College became a focus of speaker events, plays and musical performances. A 1953 graduate of the University of Rochester Eastman School of Music, Darrell Johnston was hired to lead the Music Department at San Jose City College in 1958. During his first year, Johnston founded the San Jose Symphonic Band, now known as the San Jose Wind Symphony, an adult ensemble which has competed nationally and internationally. Under his baton, up to 100 students performed per week in a highly successful chamber music program.

Chamber music may have been Darrell Johnston’s first love, but he also developed a jazz ensemble. In 1976, during the visit of King Carl XVI Gustaf of Sweden, a known lover of jazz, the SJCC jazz ensemble performed for the King in the San Francisco consulate residence during his visit to the US.

After his retirement from SJCC in 1993, Johnston continued to conduct the San Jose Wind Symphony, stepping down after 44 years. He still returned to SJCC for commencement exercises, sadly marked by recorded music rather than the SJCC Marching Band that Johnston had created and fostered.

Following Darrell Johnston, Victor Chacon took the Music Department in a new direction. He involved students in open-air productions celebrating Cinco de Mayo. One memorable musical event was an elegant afternoon of Mexican art songs performed by a visiting scholar, Chacon’s mentor, in one of the college’s courtyards.

After Chacon’s departure, the focus of the music department turned to individual performance rather than community events.

The SJCC Music Department, however, has been launched into a new and bright future. Jesus Covarrubias, former Ethnic Studies instructor, has moved to head the Music Department, which is now housed in the Carmen Castellano Fine Arts and Multidisciplinary Complex. Covarrubias is hard at work developing and teaching courses focused on Chicanx/Latinx music. He led an ensemble for a performance marking the Day of the Dead and is moving the department into the future with the development of a Music Technology and Recording Arts programs. In its spacious new venue, the department is preparing musicians for the 21st Century.

Darrell Johnston died on May 25, 2021 at his home in Monterey, at the age of 90, surrounded by his wife of 68 years, Helen, and his children. Memorial donations in his name may be made to the San Jose Wind Symphony (SJWS.org)