Walking for the Best Candidates to Serve as SJECCD Trustees

The least well-known or scrutinized candidates on the local ballot might be ones running to serve as a community college trustee. Some may be running unopposed and are, of course, elected. For those of us who have worked on a campus such as Evergreen Valley College or San Jose City College, the matter of who sits on the board of trustees is crucial. The trustees have the final say on most general spending, hiring, the curriculum, and bargaining. Who is seated as a trustee is highly important to students, staff, and faculty. 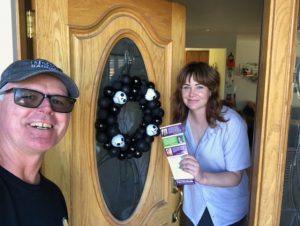 But do the voters of each “area” really understand what issues are being dealt with on our campuses? Do they even know which trustee represents their area? The very name of such candidates is far down the ballot. Candidates for this office often spend very little money on their campaign. Almost no TV ads deal with college trustee elections and very little literature is mailed to voters.  An endorsement by labor is vital because it provides financial help and volunteers and workers to support the campaign. 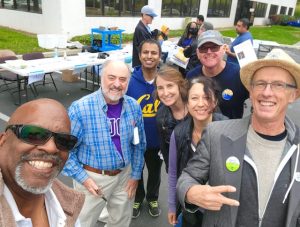 Over the years while at San Jose City College, I supported union efforts to campaign for trustee candidates who most closely were in line with union initiatives by phone banking, precinct-walking, and making financial donations. Recently, and now as a retired teacher, I “elected” to volunteer as a canvasser for several AFT-endorsed candidates for trustee: Tony Alexander, the trustee in my area, Area 3, and Buu Thai in Area 4. Both Tony and Buu faced an opponent, which made my task even more important. In this scenario, if I canvass or ‘walk’ a precinct in an area, I am confident I can really influence a voter’s decision about which candidate to support.

Precinct-walking is actually quite a pleasure! Over a couple of hours, I walk an assigned precinct, which may be a neighborhood of several hundred residents. On a lovely fall day, the scene of leaves coloring and of Halloween decorations lightens my steps. I am asked to visit a home where one or more voters have voted in recent years. I am given the name and the party of each voter, and can greet them by name. If the voter is not home, I leave a piece of campaign literature.

If the voter is home, I introduce myself as a retiree from San Jose City College and as a supporter of the candidate. Voters are usually pleased to meet an employee from the campus.  I explain the importance of trustees to everyone on campus. I highlight the strengths of the candidate. I present a real-time issue on campus, such as that of upcoming decisions by the trustees about the extent of remote learning and on-campus instruction.  Voters seem very attentive, engaged, and concerned. When I leave, many thank me earnestly for my efforts to reach out to them in person.

This fall election, incumbent Tony Alexander did win his race with over 65% of the vote, a very strong showing. Buu Thai, as a first-time candidate, was impressive, winning 48% of the vote, but was defeated by incumbent Maria Fuentes in a very competitive race. I hope the efforts of our volunteers and the union, brought some well-needed attention to our local community college issues and to the key role trustees play in our college district.

If you care about which trustees best serve our district, you might consider volunteering to canvass a precinct in the next election, and get to meet and interact with the voters. It will be very gratifying.