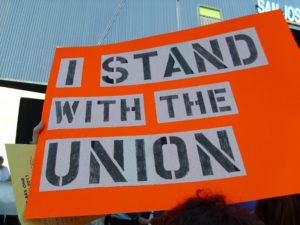 Coming from a family whose parents were public servants, I felt paying union dues was unnecessary. When I was hired as an instructor at San Jose City College in 1966, I remembered my father, a detective-inspector who had never joined a union, had retired with an unbelievably good retirement package. When others currently working at his job title received a pay raise, he experienced a bump on his retirement check amount.

I remained a non-union instructor teaching in the area of Early Childhood Education and Development until 1986 when I was offered the Golden Handshake Retirement Package. At the time, the district intended to save money by retiring instructors who were at the top pay scales.

Quite a few San Jose City College instructors applied based upon years of service and possessing the right age requirement. I thought I was lucky because I would reach fifty-eight just days before the deadline and had the necessary service years. Then I discovered I was the only instructor who had qualified for the package that was denied! My dean said it was because it would be too difficult to replace me. In other words, because I had done a good job, I was penalized. I had worked successfully with others for on-campus child development vocational training facilities for majors and student-parents trying to attend “City” or Evergreen Valley College. This didn’t make sense and I was livid! At this point, my husband referred to the retirement deal as “Golden something else.”

Fortunately, the then-union Faculty Association campus representative took an interest and accompanied me to the next board meeting. He provided supportive assistance. After I presented my own case, the board directed the chancellor to find a way to allow me to retire. That was thirty-four years ago and I’ve never forgotten the FA’s help. I am a member of the current union, the American Federation of Teachers, and its retiree chapter group, AFT 6157-R.

You may think my story doesn’t apply to you if you are currently employed by a college because many things have changed. But, believe me, you will want to protect your State of California teacher’s retirement amount because you may, like me, live longer than you expect and depend upon it. It is prudent to be up-to-date concerning new laws affecting retirement, and you may wish to support the efforts of the AFT, which works for your best interests. The San Jose/Evergreen Retiree Chapter is, in my opinion, an active and savvy bunch offering camaraderie, advice, information, and interesting tales about teaching careers and retirement activities and lifestyles.